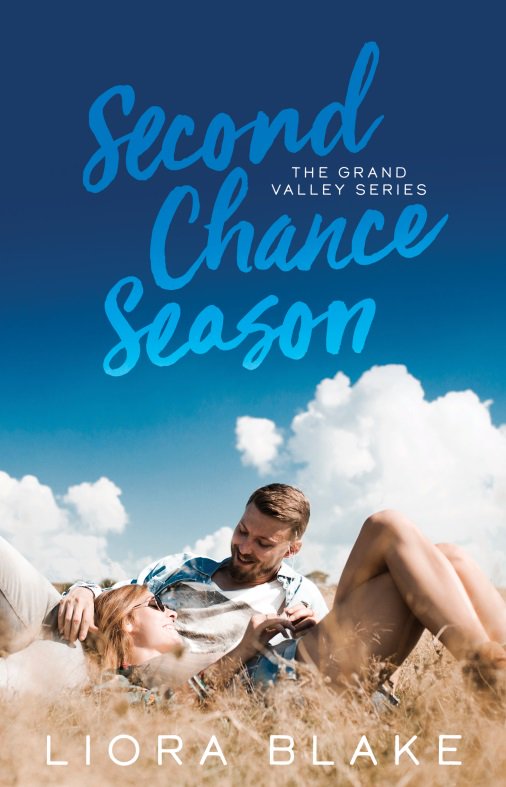 Want a read that will have you singing country music all night long? In Volume 2 of the Grand Valley series by Liora Blake, proud country boy Garrett Strickland meets equally proud city girl Cara Cavanaugh… and they quickly find out they have a lot more in common than they ever could have imagined. Read on for an excerpt from SECOND CHANCE SEASON—now available from Pocket Books!

By the time Monday morning rolls around, I’m feeling appropriately optimistic. I’ve put the Earl Kidd debacle behind me, my travel mug contains moka pot–brewed espresso topped off with boiling water to create the best Americano there is, and I have my new Sorel boots on—and, more important than good coffee and dry boots, I have a source. An “in” with the locals, a guy who, as he put it, is the guy who knows everyone. If he isn’t full of shit, then getting in good with Garrett is bound to pay dividends. I just haven’t figured out if those dividends could, or should, include the kind where we’re naked together.

I spot the headlights on Garrett’s truck from where I sit on the front steps, under the glow of a bright halogen porch lamp, plumes of exhaust visible against first light dawning in the east. When he pulls to a stop, I catch his grin through the windowpane of the truck just before he jumps out, leaving the motor running to chug away in the quiet morning air.

Oy. Garrett’s morning voice. Gruff and rough, a touch hoarse, and addling to my sanity. Maybe I need to find another tour guide. One with a dad bod and an unkempt beard, old enough to be my grandfather, and who calls me “darlin’.” Because if Garrett being my “in” involves too many early call times like this, I won’t be held responsible for my actions. He’s merely standing there holding the edge of the open truck door and leaning for- ward casually, yet after one gas station hug session with him, I’d swear I can envision every muscle in his lean body flexing underneath his clothes. One hug was all it took. I memorized the ridges my hands traced, then filled in the blanks on the rest with my imagination. My vivid imagination.

I stand up and haul my messenger bag over one shoulder. “I’m ready.”

When I step off the porch, Garrett gives in to a slow inspection of my form, and the sleepy pace he employs is even harder to manage than his morning voice. His gaze is a slow trickle, starting with the gray scotch cap on my head, complete with little flaps to keep my ears warm—a cute, themed purchase I made before I came out here, with a morning just like this in mind. Then a pass over my zipped-up shell jacket, past my jeans-clad legs, and ending at my boots. When he’s finally done, Garrett steps to the side of the opened door, leaving barely enough room for me to crawl inside without touching, bumping, or jumping him.

Garrett drives through town then continues north on Highway 133. The radio hums quietly, tuned to an oldies country station broadcasting what sounds like a never-ending playlist of Dolly Parton and Kenny Rogers.

Just as those two start to croon the doozy that is “Islands in the Stream,” Garrett switches on the dome light and the entire cab goes bright. After my eyes adjust to the change, I take in the interior, and for an old truck owned by a young guy, it’s not exactly what’s expected. Yes, plenty of dust covers the dash- board, and there are clods of dirt on the floor mats, but there aren’t empty fast-food wrappers or soda cans littered about. The bench seat’s upholstery is worn without being shabby, and in the center, there’s a length of duct tape on the seat back where he’s repaired it.

“I brought you a pair of work gloves and some hand warmers.” Garrett hooks a thumb toward the crew cab’s large backseat. “They’re behind my seat, on the floor there, if you want to grab them.”

With my travel mug in one hand, I scan the cab for a cup holder. Garrett sticks his hand out.

“Cup holder broke off a couple of years ago. Hand it over. Fair warning that I might not give it back. My Mr. Coffee and I had a disagreement this morning, mostly about the fact I forgot to buy more coffee, so I’m running without my usual high-test.”

He takes a sip and groans. “Is this from your fancy pot thing?” “You mean my moka pot? Yes.” Shimmying toward the center of the bench seat, I rise up on my knees to reach over the backseat. “It’s damn good. A stupid name, but it definitely does the job  right.” He takes another drink before moving the mug to   his other hand. He manages to steer with only two fingers, still grasping the mug, then uses his free hand to adjust the heater dial. “Makes sense why you would drag it across a couple of states with you.”

A set of work gloves and some Day-Glo orange plastic packets with HotHands printed in large black letters are piled in an open shoe box that’s sitting on the floorboard behind Garrett, shoved into the corner there. With my belly resting on the seat back, I work my upper half toward the shoe box, but the big ol’ truck’s size means I have to stretch out and lean down, and even that doesn’t quite get me there. I edge my way closer, near enough that my hip nudges Garrett’s shoulder . . . which puts my ass in the same vicinity.

Great. If only my mother could see me now.

I latch on to the box edge and drag it a few inches forward, intent on scooping up the contents as quickly as possible so my butt returns to where it belongs, firmly planted on the upholstery. Just as I do, the truck hits a rumble strip.

The combination of Garrett overcorrecting, the jostling, and my not expecting any of it means I end up swaying off balance, driving my nether regions into direct contact with Garrett’s face. I swear I can feel the imprint of his nose on my. . . just all sorts of places I shouldn’t. Garrett’s right arm shoots out to brace the backs of my thighs, mumbling an apology as he does.

I grab the gloves and return to my side of the seat, my back straight as any etiquette teacher would demand, and set the very undainty work gloves in my lap as daintily as possible. Garrett hands my travel mug back, which adds another element to the things I need to oversee gracefully. Two hands for this one.

Garrett flicks the dome light off and I catch a glimpse of him before the cab goes dark. A quirked grin is fighting with the rest of his sheepish expression, and I almost wish he would spit out the obvious, killing the adolescent awkwardness of what just happened. That I had my ass in the air, he was looking at it—and he nearly wrecked the truck.