Week Three of our favorite pastime and Monday survival mechanism was slightly less boring than last week’s ep. TG for drama. Not only do we have Olivia rocking the “villain’s gotta vill” role but now Jubilee is playing the lonely victim who no one likes/sits alone in the corner looking sour and Amber has taken over Lace’s position as Annoying Drunk Girl.

The sun has risen on another day at Bachelor Mansion and we hear Lauren B. and Amanda gossiping about everyone’s favorite big mouth (literally and figuratively). Apparently Olivia claims she spent over $40,000 buying clothes for this season of the show. My first thought upon hearing this: she spent so much money on clothes yet couldn’t find herself a good bra for those saggy granny boobs? Second thought: Olivia spent almost a year of my college tuition on clothes. What was I thinking paying for college when I could have gone on the Bachelor with multiple sparkly, sequined outfits??? 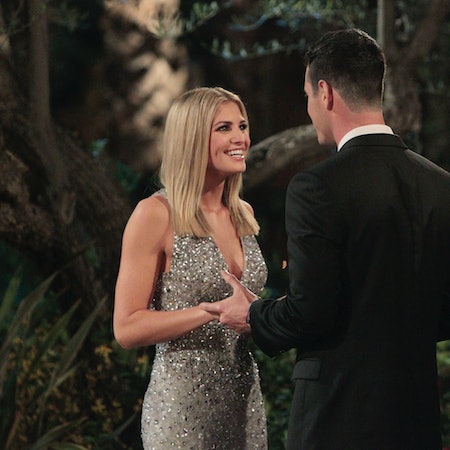 Lauren B. gets the first one-on-one date card of the episode and the producers come up with the wildly original and clever idea of taking the flight attendant on a biplane. Lauren’s terror at the prospect of flying in this thing makes me seriously question her flight attendant abilities. But it’s like, totally fine because Ben is there with his not-quite-sculpted-enough shoulder for her to lean on.

The plane takes them to this random ass field with a hot tub plopped in the middle. I guess that explains why they had Caila and Ben stop at a hot tub store last week–the producers had to do some last minute shopping!

At another boring and awkward dinner, Lauren B. tells us about her dad’s special love for lawn care. In fact, he loves his lawn so much that he has ruined Lauren B. for all men, since she’s now extremely picky.

Lauren B.: “You’re great and all, but like…can you handle a weedwacker? Cause that’s kind of a dealbreaker.”

Since Lauren B. has been so honest about her childhood trauma of being loved less than her dad’s lawnmower, Ben decides to share something with Lauren about his own dad: he had a a triple bypass surgery. Lauren B. is like “wow that must have been soooo hard” as she’s about as insightful as the rest of the people on this season. Their date ends with another surprise barn performance featuring a musician I’ve never heard of and an awkward solo dance. Seriously, where does ABC find all these abandoned barns?

Meanwhile, back at  the mansion, Caila is making me seriously doubt my Bachelor fantasy bracket choices with an embarrassing emotional breakdown that rivals Lace in batshit craziness. Apparently it took her two weeks to realize that yes, there are other girls present, and that Ben is going to date them as well. The guy she met on a plane is somewhere watching this thanking his lucky stars that he got out of this relationship.

^What Caila’s high-pitched crying voice reminds me of.

Following the time-honored group date tradition of pitting women against each other, the group date ladies are soooooo excited to go to the Los Angeles Coliseum (“it’s only like, my favorite stadium out of all the stadiums!!!”) and play some soccer. Ben reminds us that he loves sports for the nineteenth time this season and brings out some “friends” from the US Women’s National Team: Alex Morgan and Kelley O’Hara, who get so little camera time they might as well not even be there. Apparently they were less exciting than Ice Cube and Kevin Hart.

The girls run some “fun” drills and embarrass themselves on national television with their lack of coordination, and then Chris Harrison comes out in a soccer uniform that makes me physically cringe.

Amber: “When Chris Harrison shows up it’s either good news or bad news.” TG we have a Bachelor expert here to explain things to us mere mortals!!!

Chris tells the girls that they’re going to split into teams and play each other, and only the winning team will get to go to the “after-party” with Ben.

Chris Harrison: “After the game it’s the after-party, and after the party it’s the hotel lobby.”

It’s the Star team versus the Stripes team, and ABC has decided to pair their oversized uniforms with tiny booty shorts–for balance, of course. 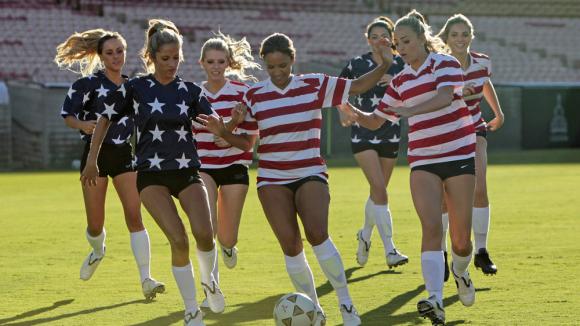 Goalie extraordinaire Lace: “I didn’t know I could use my hands.” SMH, Lace.

Things are getting tense when Rachel, who suddenly decided to have a role this season, gets hurt. She puts on a brave face, though, and gets back in the game, much to Olivia’s delight.

Olivia: “I’m glad Rachel stayed in the game after she got hurt. Now I can kick her while she’s down!”

The game goes into sudden death, and Ben CAN’T BELIEVE THIS IS HAPPENING AHHH!!! Amber finally redeems herself for being annoying and whiny up until now and scores the winning goal for the Stripes team. The Stars team could honestly not look any more pathetic right now and I actually feel a little bad for them.

The winning team heads to the after-party with Ben to celebrate their glorious victory, but Olivia pulls an Olivia and steals Ben, taking him to a hotel room to taunt the rest of the girls from a balcony. Which is why I don’t actually feel that bad when the other girls start shit-talking her and her….fat toes?

Emily/Haley (not sure which one it was TBH): “The other girls are making fun of Olivia’s fat toes, which is like, rly mean. They should make fun of her fake boobs and bad breath instead!”

The fact that Olivia apparently has bad breath makes me feel really bad for everyone around her considering how often she likes to open her mouth nice and wide.

Jami decides it would be a great idea to tell Olivia that the other girls were making fun of her while she was away with Ben.

Olivia: “What were they making fun of??? My calves?”

Olivia: “My devil horns? But I’ve been filing them down every night!!! Ugh.” Amber reveals her already-obvious desperation to the camera that she CANNOT get kicked off again this season. She tells Ben that she’s learned a lot about herself in the past year and finally knows what she’s looking for.

Amber: “I finally know that what I was looking for all along was attention and undeserved fame, u know?”

Ben: “Thnx for sharing that with me I feel like I really know you now!!!”

Amber and Ben share an awkward kiss and for some reason Ben decides to give her the rose for this date. Even Amber is shocked. Olivia is obviously miffed, but she tells us it’s okay because when Ben got up to leave he pushed off of her leg, which everyone knows is the universal sign of love.

Olivia: “He touched my leg, so we’re basically married.”

Back at the mansion, Jubilee is complaining that Ben only likes nice girls and so she probably won’t get the second one-on-one date this week.

Jubilee: “I’m a mean girl, I’m a BITCH! So ya probs not gonna happen with me and Benny boy.”

Then, OMG SHOCKING! Jubilee gets the one-on-one. Her reaction is a little over the top, if you ask me, so I don’t blame Jojo for throwing some visual shade her way.

On the morning of the date, Jubilee is acting v weird. Shushanna speaks for the first time this season and I honestly don’t know what she’s trying to say. Apparently neither does Jubilee, and she kind of takes it as an insult (I think? IDK seriously can’t get a read on this girl).

Ben: “Sry girl it took me awhile to squeeze into my tighty-whities.”

Ben asks Jubilee if she’s excited for their date, and she’s like “meh.” Then she finds out they’re going in a helicopter, but she’s afraid of heights!!! Wait a second, weren’t you in Afghanistan?? Didn’t you ever have to fly in a helicopter there? The other girls are “offended” when Jubilee is like, “Does anyone else want to go on my date?”

Ben and Jubilee’s date consists of playing some weird old man lawn game.. She makes a “white boy” joke and then is super relieved when Ben laughs, and then she takes it upon herself to conduct an in-depth analysis of Ben’s laughs.

Jubilee: “Most of the time you have a forced, awkward laugh.”

Then they go make out in an infinity pool. I guess the hot tub store was out of stock? Not gonna lie, our girl Jubs has got a great body.

Ben: “What I love about Jubilee is that she has so many layers. I kinda wish she would just take off all her layers, though.”

At their “awko-taco” (thanks for the phrase, Jami) dinner date, Ben asks Jubilee to tell him about her traumatic past as an orphan in Haiti. Casual first date convo, right? Jubilee starts crying and even though my feelings are conflicted about her, I actually feel really bad. But then Ben gives her a rose and she’s all smiles again. For some reason, the camera zooms in on their wine glasses and the unappetizing piece of steak on Jubilee’s plate. Artistic camera angles.

The rose ceremony starts out on a sad note when Ben tells the girls he just got a call that two of his close family friends passed away in a plane crash. He’s hoping that the girls will comfort him tonight, so Olivia takes it upon herself to steal Ben away and cry to him about her physical insecurities.

Jubilee decides the best way to comfort Ben is to give him a sensual massage, which Ben is weirdly excited about. Sorry Ben, don’t think this one includes a happy ending. All of the other girls are supes pissed when they see her giving him a massage and the shit-talking continues, this time directed towards Jubilee.

Amber decides she wants to  have a friendly chat with Jubilee about it. Leave it to Amber to be whining even when she already has a rose. TBH though, she sounds pretty drunk.

Amber’s plan completely backfires when Jubilee runs off crying, prompting Ben to go and comfort her. Amber  makes the genius decision of going over there and explaining to Jubilee that the other girls are mad at her because of how she acted before she went on her date with Ben. Ben cuts her off and tells her to chill TFO because Jubilee was just joking and that’s what makes her beautiful. Jubilee 1, Amber 0.

Before the rose ceremony, Lace decides to cut her losses since it’s pretty obvious at this point that she’s not going to make it to the next episode. She tells Ben she can’t love him until she loves herself, which is surprising to me since she seemed pretty pleased with herself thus far. She leaves by her own accord but still gives us one last ugly cry before she heads out. I’m sad to see her go because she was so entertaining, so let’s hope someone else steps up to fill the crazy void.

Ben punishes Olivia for crying about her cankles by giving her the last rose of the rose ceremony, and delusional Olivia claims he’s “saving the best for last” and that he gave her waist a squeeze when he hugged her. What an intimate secret love language they have! Shushanna and Jami go home and no one really cares that much, since Shushanna barely spoke and Jami was a snitch anyway.