Last night’s The Bachelorette: The Men Tell All mostly comprised of guys who barely had a role on the show pretending like they actually mattered by “voicing their opinions,” Kaitlyn in yet another sequin cutout dress (does her wardrobe include ANY dress that doesn’t have sequins or cutouts?), and lots of shots of the audience making expressive faces.

The guys are introduced, and is it just me or were there not that many of them? I went and looked it up and they left out some noteables, which left me with a lot of questions. I really felt like I needed an explanation from Ryan B. about his hair—what products does he use? How did his relationship with Kaitlyn affect his gel technique? And even though they were eliminated in the first ep, I would have loved appearances from Josh, the creepy male stripper, and Shawn E., the creepier amateur sex coach. I was thrilled to see Tony was there, but then we barely heard a word from him!!! What a waste. I wanted to know if he eventually found spiritual nirvana.

Things kick off with a discussion of Ian’s Jekyll and Hyde personality switch where he went from being creepily obsessed with Kaitlyn to being a Princeton track star model intellectual douchebag who is too intelligent and cool for Kaitlyn.

“I think Princeton needs to teach a class in not being an a–hole.” ←Tanner, you betch.

Ian decides to take it upon himself to take off his jacket, stand up and walk to the front of the stage, get down on one knee  and give a long, repetitive and often grammatically incorrect (Princeton, huh?) about how the way he acted during his exit from the show wasn’t representative of who he is as a human being. Did he get that line from Tony? Ian explains that the reason he’s awkwardly on one knee is that he’s trying to express his humility.  Meanwhile, I physically cringe at the TV from the pure awkwardness of it all.

Ian somehow makes me like him less for thinking he’s important enough to stand up and give a speech. You can’t just give a speech without being called up to the hot seat by Chris Harrison! That’s like, the rules of  Bachelor nation!

Ian, from his knees: “Okay, now can I be the Bachelor? Pretty please?? Look how humble I am!”

Despite his, in my opinion, not at all genuine and purely-for-the-cameras apology, apparently the guys wanted to pretend like they were forgiving, so JJ goes to give him a hug and a bunch of them shake his hand. Awww, friends again! Not.

Can we just talk about the amount of shade Tanner is throwing in this picture?

Then we move on to the infamous JJ and Clint romance. If I thought Ian’s painfully awkward speech made me cringe, I don’t even know what word to use to describe my reaction when they showed the clip of JJ and Clint talking about squeezing each other’s back pimples in the shower. EWWWWWW. Even typing this now makes me want to vom. But I guess true love is true love.

Clint sets the record straight (ha ha!) by telling us that he IS straight and that he and JJ just had a really special connection. They were totally joking about being villains who gotta vill and it’s just that no one else in the house got their humor.

JJ: “Clint and I had really deep and meaningful conversations about our families and our lives and our salmon colored shorts collections and our bacne. The other guys were just jealous.” 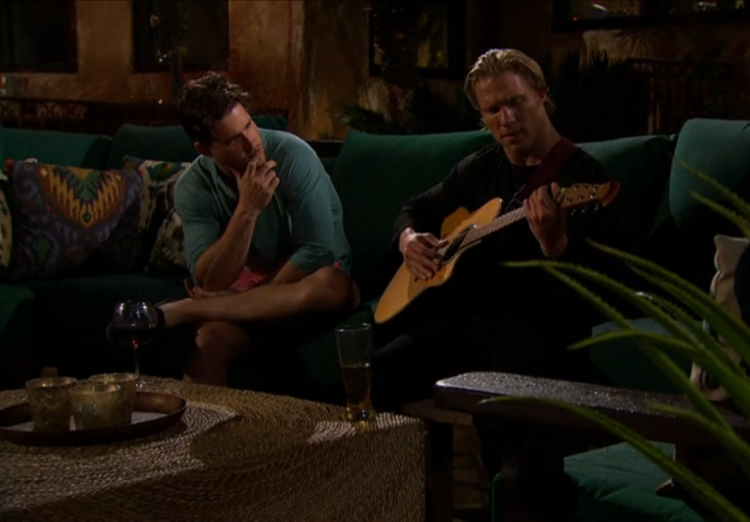 After the guys debate back and forth about Clint and JJ’s love affair, Kupah decides to be like “I don’t care about the other guys. That’s not what this show was about. I want to talk about Nick, one of the other guys!”

Kupah launches into a tirade about how Kaitlyn was such a bad Bachelorette for bringing Nick on and how unfair it was to the men. It’s hard to take Kupah seriously, given his outfit. But also: last time I checked, Kupah, you got yourself sent home before Nick even got there! Bitter, much like that T-shirt and suit vest combo, doesn’t look good on you, bro.

Corey also decides he has an opinion, even though he, too, barely had a role on the show and probably got kicked off because the producers found out he lied about being 30 and is actually an elderly person.

Corey: “I think that a lot of Kaitlyn’s decisions throughout the show were in bad taste and disgraceful relative to what we were looking for. I don’t think she took the responsibility of being the Bachelorette the best that she could have.”

Ben H. saves the day with his cuteness and responds, “I’m glad she was my Bachelorette.” Dawwwww. Bye,  Corey.

JJ tells us that the other guys just didn’t get his special brand of douchebag humor. “I’m sorry everyone is so jealous of my terrible jokes, but I can’t help it that I’m a douchebag.”

Also, I would like to point out that although JJ is still a “former investment banker,” he is no longer from NYC. Now he’s from Denver, Colorado. Apparently after being called a turd by Amy Schumer, he could no longer show his face in Manhattan.

Ben Z. comes out, much to the glee of the horny middle aged women in the audience. We watch an emotional (but still containing shots of him shirtless) clip compilation about his relationship with Kaitlyn. Ben Z. tells us he still can’t cry, but listening to JJ and Clint talk about their relationship almost made him laugh so hard he cried. He says he put his walls back up after the weird funeral date in Dublin, and that may have been the reason that Kaitlyn sent him home. Chris Harrison comments that, from the sound of the audience, it doesn’t sound like he’ll have a hard time finding love again.

We also hear from our favorite fake superhero/serial killer, Jared. Jared, at the advice of Chris Harrison, has had a facial hair makeover and looks noticeably less creepy and Hannibal Lecter-esque. He says he hears the Cranberries song he and Kaitlyn awkwardly danced to in Ireland every day, leading me to picture him in his creepy serial killer lair filled with stalker-photos of Kaitlyn, with “Linger” playing on a loop. But never fear—Jared and he cleaned-up beard will have a chance to find love again on the Bachelor in Paradise!

Chris Harrison puts on his things-are-serious-now face and reads some of the hate-tweets that Kaitlyn has received since her “controversial” stint as the Bachelorette. The tweets are actually really mean and everyone makes shocked faces as if they haven’t already spent hours looking at Kaitlyn’s Twitter feed. Kaitlyn tells the audience that she’s been getting death threats and although she can take the heat, she feels bad for her family. Chris Harrison says these tweets are unacceptable and he would take Kaitlyn as a role model for his kids over an Internet troll any day. Cue aww from audience.

Kaitlyn has to face Jared and Ben H., and she says how bad she feels for sending them home because they were both so nice. What she doesn’t say is that the reason she sent them home is BECAUSE they were so nice. I mean, look at the two guys we have left: one has an anger problem, and the other was the the villain of not one, but TWO seasons. Nice guys finish last—or should I say, nice guys either get sent to Bachelor in Paradise or, if they’re attractive enough, get to be the next Bachelor (I’m lookin at you, Ben H.)

Kaitlyn tells us she and Nick were talking on social media and texting after her season with Chris Soules, but because she knew she might be the next Bachelorette, she had to put their “connection” out of her mind. She joked with him that she hoped he would walk out of one of the limos, but she was shocked when her showed up in New York and the producers totally hadn’t planned that from the beginning. Right.

We also finally find out the truth behind the enigma of her fear of birds coupled with her bird tattoos. “They’re on the back of my arms! I can’t see them!” Ah, of course! It all makes sense now!

Since Kaitlyn loooooves pranks, the ep of course wouldn’t be complete without one. Kaitlyn is attacked by a guy in a pigeon mask and freaks the eff out. It turns out to be Joe, who she hugs, and then says, “Joke’s on you! I’m only afraid of them when they FLAP!” Duh, Joe. Don’t they teach you anything in Kentucky?

I have to say, Kaitlyn was way funnier/sassier than she’s been all season. It reminded me of the old Kaitlyn from Chris Soules’s season who actually had a personality. This makes me blame the producers for squashing her inappropro spirit. Campaign to bring back the plowing the field jokes!!

Jonathan: “It was like, really mean of you to bring Nick on the show.”

Kaitlyn, upon seeing Ryan, the drunk guy from the first episode, asks him if he’s all horned up right now, and I’m like YAAAS QUEEN. Ryan pulls an Ian and gets up without being summoned by Chris Harrison to apologize for his behavior. He gives Kaitlyn a rose, which is nice, I guess. I do like his new hairdo, although this tame version of him is much less entertaining. Campaign to bring back drunk Ryan!!

Honestly, the best part of this episode was all the promos for Bachelor in Paradise. Both crazy Ashleys will be back, and Ashley S. has replaced her onion with a parrot. Jonathan, Joshua, JJ, Jared and anyone else whose name starts with a J will also all be on this season to find love in a hopeless place.

It’s important to note that there was no Britt and Brady update. I’m PRAYING that this means their fake relationship is over and Britt will be on Bach in Paradise as well. Is it sad that I’m more excited for Bach in Paradise than I am for the Final Rose episode of this current season? Probably. But not as sad as Ashley I.